Àdhamh Ó Broin’s passion and significant contribution to Outlander: translating the scripts into Gaelic, and teaching the language to the cast, has recently gained national recognition in the form of The 2016 International Scottish Gaelic Award. The award is given to the individual, event or organization that best places Gaelic in an international, non-English speaking, context. I’d say Àdhamh and Outlander have certainly done that.

I chatted with Àdhamh briefly about his award, and he had this to say:

“It feels pretty good. I’ve never had any great desire to receive conventional recognition as I’ve quite frankly been too busy to give it much thought, but when it came along it was great. I’m just so grateful to everyone who nominated me, because that meant tonnes.”

As both friend and fan, I extend my support and deepest congratulations to you, Àdhamh for following your heart, and for achieving this milestone in your work. Awesome. Can’t wait to see what you do next, buddy 🙂

In tribute, I’ve put together a montage from our May, 2016 interview. Please enjoy.

(Footage of Àdhamh singing Caledonia in Gaelic at Scotcon by glasairdriver)

To see Part 1 of my Full Interview with Àdhamh from May, 2016, CLICK HERE

The Gaelic consultant scooped the International Award for his work as a Gaelic language coach on the popular TV series, which has showcased the language to an audience of millions.

Gaelic in the STARZ original series Outlander, now in its third season, is considered integral to the authenticity of the show and its characters

In his role, Àdhamh teaches the actors to deliver complex Gaelic-language scenes despite having no previous spoken ability.

Glasgow-based Àdhamh, who is also a musician and writer, is founder of Droitseach, a project which seeks to revitalise interest in Scotland’s dialects.

He is the first person to raise a family of native speakers of his home dialect in 80 years.

“Àdhamh is directly responsible for the Gaelic language’s highest ever position of global regard,” said one of his nominees – of which there were many.

Stars of the show, including Sam Heughan and writer Diana Gabaldon, have long praised Àdhamh for his dedication to the language and efforts in teaching the cast.

“They showed great patience as I learned the ropes on the film industry during season 1 and had the vision to place the Gaelic language “front and centre” of the story,” he said.

He dedicated the award to all the fantastic crew who “work their socks off from dawn till dusk on Outlander, often in very trying conditions, many of whom will never receive this kind of attention for their work.” 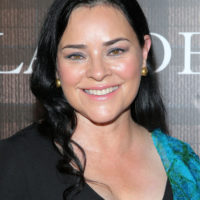 Re: Deleted Scenes… Episode 207, (with Corrections) Raise Your Voices, But Do So with Respect