“I was basically trying to go two bikes with one arse. I had to make a decision.”

IN the lane outside a Dumfries pub, a woman has just given Gary Lewis a sharp cuff round the ear. “That was for the bad thing you did,” she chides. The actor, his blue eyes twinkling, looks mock chastised. “You realise that wasn’t me?” he says, breaking into a grin. “That I was playing a character?” The woman purses her lips, her face softening a bit. “I know,” she concedes. “What you up to next?”

What indeed. Lewis is seldom idle. Or resting, as acting types call it. He’s currently gracing television screens in ITV crime drama The Level, which is halfway through its six-week run.

No stranger to the genre, Lewis, 58, is fresh from starring in BBC thriller One of Us alongside Laura Fraser, Kate Dickie and Julie Graham. In the pipeline is a role in the much-anticipated ITV series, Muncie, which centres on the Lanarkshire murder spree of serial killer Peter Manuel in the 1950s.

First, though, we are here to talk about his latest onscreen incarnation as Gil Devlin in The Level. Lewis picks carefully through the synopsis, cautious of revealing any crucial spoilers. “A lot of the heart and complexity about the drama is to do with family ties,” he says. “It is not a straightforward police crime drama – there is a lot more to it.”

We are sitting in a quiet room above a coffee shop on the High Street. Away from the hiss of the espresso machine and clink of cup on saucer, the only sound is Lewis’s distinctive gravelly voice. He speaks in the mesmerising rhythm of a true storyteller, the pitch sometimes so low and deep that you have to lean forward to catch the words as they melodically roll off his tongue.

Complex family relations have become something of Gary Lewis trademark. From playing the dutiful son whose filial obedience overshadowed his own life aspirations in Orphans to the gruff father in Billy Elliot, he has a talent for being the grit in the oyster.

Past roles include a recovering alcoholic alongside Peter Mullan in My Name Is Joe and the hackle-raising, malevolent racist McGloin in the Martin Scorsese-directed Gangs of New York, each stirring dark and conflicting emotions that linger long after the final credits roll.

Lewis will next appear on our screens in the coming months in Muncie, about the detective who doggedly laboured to bring Peter Manuel to justice. Manuel will be played by Martin Compston with Douglas Henshall in the role of William Muncie. Lewis has been cast as William Watt, a man wrongly accused of murdering his wife, daughter and sister-in-law in the Burnside area of Rutherglen near Glasgow in 1956

More than half a century later, Peter Manuel is a name which still strikes fear into the heart of many across Scotland. Lewis was a baby when Manuel was hanged on the Barlinnie gallows in 1958, but growing up in the Easterhouse area of Glasgow he often heard stories about Manuel’s reign of terror. Lewis says his mother had a strong reaction when he told her about his part in the mini-series.

“It brings back so many memories,” he says. “My mother worked in MacFarlane Lang biscuit factory and told me there were lassies beside her who were absolutely terrified because they lived in that area. They all knew who it was, this monstrous character, but the police couldn’t get him.”

If he wasn’t an actor, one imagines Lewis might be a social anthropologist. Or perhaps a poet. At one stage – talking about his early career in theatre – Lewis recites the 1943 Hugh MacDiarmid poem Krassivy, Krassivy about John Maclean, the school teacher and revolutionary Socialist of the Red Clydeside era (“I missed a line and got one back to front, but that’s the jist of it,” he laments afterwards).

The middle of three children, Lewis’s father Chick was a coppersmith while mother Mary worked in the aforementioned biscuit factory. He grew up in Glasgow, but in recent years has called south-west Scotland home. Lewis is fiercely private of his family life and won’t elaborate despite gentle coaxing.

What does he do for fun away from work? “Hobbies?” roars Lewis, with guffaw of laughter. “I’ve not been asked that since I filled in a form for a job at school.”

Reading is the short answer. Any free time is spent with his head in books, including most recently Dirt Road by James Kelman, which he applauds as “beautiful, generous and insightful”.

Lewis credits his former high-school English teacher, Murray Learman, with sparking an enduring love of literature and acting. “He was a big influence and started a film club that showed us Saturday Night and Sunday Morning, The Loneliness of the Long-Distance Runner, MASH, Catch-22 and Kes.

“Seeing Kes you think: ‘Wow. There’s a wee guy like us.’ We would have discussions about these films. This same teacher had a bookshop set up in his classroom. One of the first books I bought was A Wizard of Earthsea by Ursula Le Guin. I still follow that author to this day.”

Lewis left school with no clear idea of what he wanted to do with his life. He worked as a street sweeper and later in a library. After completing a social sciences degree at Glasgow Tech – now known as Glasgow Caledonian University – he did various jobs including “talking newspapers for blind folk, working with the young unemployed and in a hostel for homeless guys”.

One of his early acting roles was the lead in the Freddy Anderson-penned play Krassivy, inspired by the life of Maclean, which won a Fringe First award in 1979.

Lewis didn’t become a professional actor until he was in his thirties. “It took me a long time after that to commit,” he recalls. “I didn’t really know where the door was.” He kept knocking anyway and in 1991 began working with Raindog, the Glasgow-based theatre company founded by Robert Carlyle, Caroline Paterson and Stuart Davids.

Parts followed in One Flew Over the Cuckoo’s Nest, Ecstasy and the critically-acclaimed Wasted alongside Carlyle, Sandy Morton and fellow Easterhouse boy Tommy Flanagan. “There was a lot of improvisation work and Bobby was a great director,” he says.

By this point, he was juggling acting aspirations alongside working to pay the bills. Or as Lewis succinctly puts it: “I was basically trying to go two bikes with one arse. I had to make a decision.”

He hasn’t looked back. Among his projects in recent years are the hit US television series Outlander. Sony Pictures Television films the show on location across Scotland with many of the interiors shot at Wardpark Studios in Cumbernauld. Set on the brink of the 1745 Jacobite rising, the show has become a global phenomenon.

“The fan base is extremely passionate,” says Lewis, with masterful understatement. “It is strange because I live in Scotland and Outlander isn’t massive here to the extent it is in Australia, America and Canada. There are fans all over the world.”

His character, clan leader Colum MacKenzie, bowed out in dramatic fashion and Lewis admits he will miss being part of the show. “It wasn’t until I was in the car going home that it hit me it was my last day,” he says. “Even when the producers came down for my final scenes, it still didn’t sink in.

“It was only afterwards that I suddenly thought: ‘Jesus, that’s me. I’m done.’ Everyone else still had scenes to shoot and I was already down south working on something else by the time we had the wrap party in Glasgow, so I never got the big cheerio.”

While Lewis views this as a positive on the whole, he bristles slightly when asked whether it marks a welcome change from the poverty, crime and gangster-themed flicks that his hometown of Glasgow has become synonymous with in the past.

“Some people have a reaction to the gritty stuff, asking: ‘Why is it always so bleak?’ but good God, it is very important that we don’t censor ourselves,” he says. “A film like Ratcatcher – could you imagine if someone said, ‘Oh, I really think you should make something a bit cheerier with some mountains.’ Where do you draw the line?

“I don’t think these are stories we should stop telling. The Scottish tourist board must be very happy with Outlander and other stuff just now, but we shouldn’t have a cull on social realism.”

Gary Lewis could happily play raconteur all day long. Yet, even after all his decades in the business there are moments where he appears to still be pinching himself at how fortuitously things have panned out.

“When I started out in this I never saw it as a career,” he muses. “I used to refer to it as a bit like joining the circus: you really don’t know what is going to happen. I think I’m just pleased that I have managed to hang on in there.” OutlanderBTS Adventures: Gracious, Humble, and FUN!!! Most of The (Male) Cast of Outlander @Starfury, Part 1 (Thank you Guys!) The Bat Suit, and There’s Room for Everyone 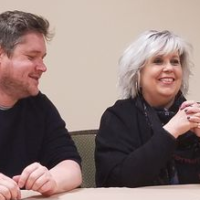