Celebrity fans become just as excited and passionate as the rest of us when it comes to Outlander.

The most prominent celeb fan in our community is of course William Shatner, whose Charity Horse show is this weekend. There is still time to buy a raffle ticket for $5.00 for a chance to win an Outlander t-shirt signed by Sam. To read about Bill’s Outlander fan journey and for more info on his charity CLICK HERE.

Actor, writer, director Lou Diamond Phillips whose portrayal of Ritchie Valens in La Bamba made him a household name, is also a fan. He discovered Outlander in April of last year, when he binge watched Season 1. He said Outlander reminds him of a Follett novel, referring to best selling author Ken Follett, a Welsh author of thrillers and historical novels.

I know I'm late to the party but I just binged S1 of #Outlander…Wow! What an incredible show! Reminds me of a Follet novel. @YMPhillips

According to TV Guide, LDP Is of Scotch-Irish, Cherokee, Filipino and Hawaiian decent, so maybe that wee bit of Scots ancestry nudges along his interest.

And in July, 2016, here he is looking quite excited for the S2 finale… Patty O’Furniture indeed.

Tacos tonight for the #Outlander finale! Reminds me of that famous Mexican/Irish landscaper Patty O'Furniture! pic.twitter.com/K464fsuWWT

This past April there was some Twitter talk about Lou joining the cast of Outlander, in which a fan (Ruth) proposed the idea, looping Maril into the conversation. Lou and Maril then relayed their appreciation of each other’s work…

@TallShipProds Love @LouDPhillips on Longmire! He's an @Outlander_STARZ fan. Maybe a role for him in Season 4?

.Lol- Haven't started casting S4 yet. Trying to finish S3 first! But, have you ever been to Scotland @LouDPhillips ?

.Thrilled to hear you're a fan of the show. Big fan of your work as well! @Outlander_STARZ

With Season 4 writing, costume design, location scouting and set design underway, casting won’t be far off (well, Rollo has already been cast, as you know).

I did a little homework and it turns out there _is_ a perfect role for Lou in Season 4. Do you guys remember Nacognaweto? (‘Course ya do) Think Jamie, a bear, and a fish. The character description is practically made for Lou Diamond Phillips:

Nacognaweto is a village chief of the Tuscarora people and is of perhaps late middle age in Drums of Autumn, with tan skin and gray streaks through his black hair. Source: OutlanderWiki.

Maril has plainly said she is not a fan of stunt casting (the casting of a very famous actor or other celebrity as a guest star in a movie or TV show in order to garner publicity). I have to say I agree; I think it would pull me right out of the story line.

generally not a fan of stunt casting. Can be distracting 🙂

However, Dominique Pinon and Frances De La Tour are both well known, accomplished actors, as are Gary Lewis, Tobias Menzies, and Graham McTavish. So, who knows, maybe we will see Lou Diamond Phillips joining our beloved cast for Season 4.

In the meantime, we have a glorious summer of adventures ahead, and the beginning of another sweet autumn to experience before Season 3 hits the screen as news of Season 4 progress trickles in. Sending my best to you… 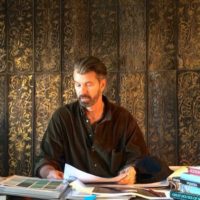