Preparations for the night

Set up is in full swing for tonight's #BAFTAScot16 Awards pic.twitter.com/8DWknn3eEK

Here’s the press line, all ready too

Want to see your favourite stars arrive for the Awards on Sunday? A selection of red carpet arrivals will be LIVE on Twitter from 5pm pic.twitter.com/2weKa0yBrx

And here’s Gary, no doubt thinking, “how can I hug these people with this barricade here???”

Sam appears to be sporting much shorter locks here, as they acknowledge the whole team involved in the show…

Wonderful Gary, as usual giving everyone their due…

"There's some kind of wonderful alchemy" about Scotland that makes it so creative says Peter Capaldi #BAFTAScot16 pic.twitter.com/jFpKBUPJ9t

Before the awards started there was time for… well, what would we do without Steven Cree, keeping things basic?

I just bumped into the King Of Men in the toilets!! It was a beautiful moment. @SamHeughan #KingOfToilets pic.twitter.com/Tjg70G7GEO

In short order, Actor television was awarded to Douglas Henshall, which is great, as he’s a familiar face to the Outlander world. But this was also the category for which Sam was nominated. ?

(Douglas played Taran MacQuarrie in the second half of Season 1)

Here’s a snippet of his acceptance speech

Douglas Henshall wins the award for Actor Television for his role in #Shetland #BAFTAScot16 pic.twitter.com/yCdWeuSV6N

Sam and Cait announced the winners of a category (sorry, not sure which one? Home grown talent? ?) Thank you @Mandyna for this clip

Here is her speech- way to gooooo!

Here’s a shot of the Outlander table as Cait thanks Maril, Ron, Andy (driver), Marnee (costumes), and Anita (makeup), Michael, and her husbands Sam and Tobias. Sam’s beautiful girlfriend MacKenzie Mauzyis also at the table. Sam is amazingly gracious as always, while he must also feel a bit disappointed (or am I projecting? ?). Your day will come, Sam! I can feel it in my bones ? And, I’ve been informed that Cait’s boyfriend is also present (missed that), Tony McGill. Wonderful that they have their significant others for this big night, as well as their Outlander family. (putting a better shot of Tony in, below). and from Cait’s sister…

Here’s a shot of Cait with two of her sisters The winner of TV DRAMA goes to Shetland #BAFTAScot16 pic.twitter.com/GKB6OWD4Ab

Gary Lewis presents the final award with his usual depth….and of course, finishing with a warm embrace! What a true leader

Here’s a shot of the room during Gary’s speech, including our own Mr. Cree in the foreground, Update: with his wife, Kahleen Crawford, who is a casting director for tv and film, seated behind him. (thanks to my top secret sources 😉 ;)) Here are some parting words from BAFTA

Every year I come to @BAFTAScotland and every year I can't believe how truly proud I am to be Scottish! Best country, best people! X pic.twitter.com/Y6fo2JRTxW

Thank you for following our awards ceremony. It's now time for dinner and we'll be back giving you a look into the after party #BAFTAScot16

If we get a glimpse into the after party, I’ll cover that in a separate piece… stay tuned 😉 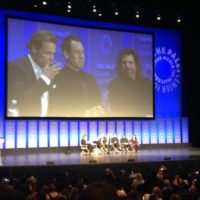 World Outlander Day Is Even Better Than A Pair Of Ripe Melons!