Jack Holden, (who I’m estimating to be 25 years old) has landed the role of Hector, Lord John Grey’s first love, who is *SPOILER* killed in the battle of Culloden. No stranger to war stories, Jack has played in many: War Horse, Johnny Got His Gun, and Journey’s End, to name a few.

Since February of this year, Jack has been with the Royal Shakespeare Company, playing “Lysander” in a national tour of Midsummer Night’s Dream, which visits 12 venues including Glasgow (possibly where the casting team spotted him). (source) He is just finishing filming Journey’s End, in which he plays a WWI character called Bert. I'm doing a film about the First World War.
It's called #JourneysEnd pic.twitter.com/xeBI75buiM

Here is an interview with Jack about the politically controversial Johnny Got His Gun, a one man show in which Jack plays a WWI soldier who has lost his limbs and his face… (looks like your political statement didn’t keep you from getting this Hollywood part at least! ?)

Here is audience reaction to Johnny Got His Gun

Here are some excerpts from a 2014 interview with Jack:

You have also appeared in other demanding plays such as Schiller’s Don Carlos, Dickens’ David Copperfield and The Aliens by Annie Baker. What is it you like about the more ‘serious’ roles?
Each role usually presents one or more serious challenges, but I’d never call any role ‘serious’. Real people don’t think about themselves in terms of ‘serious’ or ‘comedic’, they are real people placed in, what may appear to the outsider to be, serious or comedic circumstances. A serious challenge in playing the part of KJ in The Aliens by Annie Baker was a monologue of the word ‘ladder’ repeated 120 times. This word takes control of KJ at a very serious time – his best friend has died, but the results are comedic and tragic in equal measure – a ridiculous word, but one which is holding so much pain.

Would you like to appear in a comedy? Or in a musical?
Regardless of the pretentious spiel above, I’d love to appear in a comedy and I’d love to be in a musical – preferably one of the classics like My Fair Lady, Barnum, Singin’ in the Rain, A Little Night Music etc. After the relative heavy subject matter of World War I, a lighter piece would be nice!

Were you familiar with horses and horse-riding prior to auditioning for War Horse? If not, (how) did you prepare for the role?
I wasn’t really familiar with horses, aside from riding friends’ horses and riding horses on holidays. I visited an equestrian centre near to where I live, swatted up on riding lingo and the whole cast were taken on research trips to stables and to the King’s Troop, one of the last remaining cavalry regiments.

Now Joey is a (fantastic!) and larger-than-life wooden puppet, visibly operated by puppeteers. What I found amazing when I saw the play is that you completely forget about that. For you as an actor, while on stage, do you perceive Joey as more than a puppet, too? More like a (four-legged) fellow actor (or is this a silly question)?
The reason you forget about the puppeteers is that they are so very good at what they do. The movement, the breathing, the sounds, the attitude, the sheer horseyness of them makes it easy to suspend your disbelief. And, for the human actors, because the three puppeteers operating the puppet are so in sync, it is just the same as acting opposite a single actor.

What is something embarrassing or unexpected that has happened to you on stage?
In rehearsals for War Horse, I fell off the horse! In the play I have to mount Joey (the full size horse), unaided, with a small run-up. I was so desperate not to fail that I sprung up onto his back and flew right off the other side! Much to my embarrassment, the whole thing was filmed. The footage will come back to haunt me, I’m sure. Only good thing is that it wasn’t in an actual show!

What do you like to do to chill out?
I like to cycle – I got a wicked racing bike for my 21st birthday. Riding it in the streets of London is an extra adrenalin rush! I also like to go to the cinema. I love film and you can’t beat escaping from the busy streets to see an afternoon showing of a film on a huge screen. I’m getting excited just thinking about it! And cooking – Delia Smith is a goddess.

Favourite holiday destination? LA… or the Isle of Skye, Scotland. (a ha!)

In another complex, intense film, here’s a clip of Jack playing “James” in The Levelling

Not sure how much we’ll see of Jack as Hector, but I have a feeling that what we see will be very powerful. Looking forward to it. Welcome Jack.

For my interview with Jack, go to Jack Holden, on Playing Hector. OutlanderBTS Episode 411, The Discussion – If Not For Hope 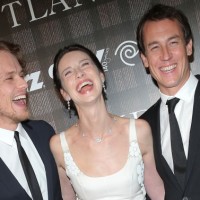