We see lots of news about the current cast and crew of Outlander, but what about the others? Remember those “Where are they now” type shows? I’m starting a “Where Are They Now” series for the blog. This started as a single post, but soon became like keeping spinning plates going – As I waited for the latest updates from some people, the news for others would go out of date, so I’d circle back, and then, you get the idea. So, I’ve decided to do an ongoing series, called OutlanderBTS: Where Are They Now, featuring a handful of past cast or crew members at a time. Stephen has been working nonstop since leaving Outlander; he played Thomas Malone in Shetland, Robbie Shaw in Silent Witness, Mark Guiness in Little Boy Blue, Johnny in Tin Star – and the list goes on and on. He also had work over the pandemic, and more recently…
“I have two brand new shows – one for ITV and another for Apple respectively, both coming out later this year. Two very different roles – one is a loving father… the other a brutal kidnapper. I like to keep moving and changing…mix it up a little …keep it interesting hopefully. I think they’re as good as any projects I’ve been involved with, and some of my best work to date.”
Stephen went on to write, “Andrew Gower and I are making the feature film of ‘Humpty Fu*king Dumpty’ based on the short film we made, of the same name. I have already written the script and fingers crossed, will be directing it January 2022.” Stephen’s got a body of pretty great work out there, so if this is some of his best work yet, I’m looking forward to these new projects!

If you haven’t seen the short film Stephen and Andrew made, check it out here:  Humpty Fu*king Dumpty. Will we see Stephen again in Outlander?

Wonderful Angus Mhor is deid, as we all know, but we can certainly hope for flashbacks! Photo: Colin McFarlane, Twitter, on the set of Queens of Mystery, June 9th, 2021

Colin has been a busy bee!

“Most of the things I am doing are all top secret which is really annoying… There is a big voice project for the States I would love to yell about but I can’t do that until it airs some time after July.

Here is some info on one of the TV shows I am currently filming. (I am not allowed to talk about the other one). Queens of Mystery follows the adventures of Beth, Cat and Jane Stone, three crime-writing sisters, and their 28-year old niece, Detective Matilda Stone, as they use their extensive knowledge of crime – real and fictional – to solve whodunit style murders in the picturesque village of Wildemarsh. My episode, The Modern Art of Murder, is set at the opening of a new art gallery, where I play a celebrated but callous art tutor who has come to town on a vindictive mission. The show is camp comedic fun, and can be found on Acorn TV in the US.”

Colin went on to write about the game show he’s working on, which just premiered in the US on June 10th, called The Cube.

“It’s a brand new game show for the US. It’s been a big hit in the U.K. for years, where I am the voice of the Cube. But the American version has a few twists on the U.K. format. So you will hear my voice in two very different modes and it involves me having a lot more fun with the contestants and the host! It’s a show that creates nail biting edge of the seat tension with the use of state of the art slow mo techniques and spine tingling music! It starts on TBS on June 10th and there are 11 episodes.”

Here is a sample of Colin’s beautiful voice, as The Cube…

Watching high-stake moments from the sidelines hits different‼️ Do you think these contestants have what it takes to #BeatTheCube? Check out this exclusive sneak peek 👀 and don’t miss the premiere TOMORROW at 9/8c on @TBSNetwork‼️ @59thPrairie pic.twitter.com/Yn5ZaiDzzq

“I am also doing a new cartoon series called MILO but that will only be broadcast in UK.”

Colin went on to write, regarding the audio series, Supermind: “I play Supermind!! And some of your subscribers who are into British music from the ’80s might remember pop star Toyah Wilcox who stars alongside me!”

The premise of the first series of Supermind – In 1930’s New York, the hot sensation of the cabaret circuit is urbane illusionist Art Hardwicke, whose stage name – Supermind – hints at his real-life mentalist powers. Aided by his manager, Lady Daphne Witcombe, and manservant Frampton, he fights crime and injustice wherever and whenever he is able. In this 10-episode comic melodrama, aping the earnest American radio dramas of the era, Supermind manages to rescue society heiress Anastasia Del Ray from being kidnapped by hoodlums, and her gratitude comes in the form of declaring she’s going to Hollywood to make a movie of Supermind’s life – but starring herself as Supermind. Meanwhile, Professor Fenella Vaytell, of the Institute of Brain Studies in New York, has been developing a powerful weapon to seize control of the minds of the entire country. In the employ of her Nazi paymasters, her nefarious scheme to do this will not only endanger Anastasia, Supermind, Lady Witcombe and Frampton, but also the entirety of the United States of America! Will Supermind use his prestigious powers to save the day? Will Lady Witcombe profit off his powers, as always? Will Frampton faint at the sight of fisticuffs? Will Professor Fen Vaytell throw her head back and emit a wickedly evil laugh? Find out the answers to these questions, and more, when The Brain Drain (the first season of Supermind) debuts on audio listening platforms across the globe.

I look forward to seeing and hearing Colin in all of these new endeavors, and keeping up with him as time goes on – lovely guy that he is.

Will we see Colin again in Outlander?

I think the Murcasta storyline bumped the Jolysses storyline, which would have been interesting. I could be wrong, but I doubt we will see Ulysses again in the series, unfortunately.  People have asked if he might be featured in the Lord John Grey spin off that we hope is in the works, but the time periods may not line up for that. You may have seen Caitriona’s tweet about The MacBeths Film – Keith gives us an update below.

“The Macbeths is an adaptation of the play that focuses on the couple, their ambition, and the impact of their actions. It is set solely in their bedroom, and has a nightmarish psychological helter-skelter feel to proceedings as they unravel. I first did the play 3 years or so ago… I was actually performing it at night at the Citizens Theatre whilst filming my last week on Outlander… So the play has a great affinity for me with the show… I remember the crew trying to get Hayes’ execution done in time to allow me to make it back to the theatre in order to perform the gentle story of a murderous tyrant on a power rampage 😂😂.

We filmed The Macbeths earlier this year (2021)…. The idea came from the director and was due to the pandemic restricting the opening of theatres. It was an experimental piece initially, and that continued into the film version. It was exhilarating to be part of, and I can’t wait to see what people think. We performed it in a studio space with audience on top of us, so the feel of the film is one of claustrophobia and paranoid anxiety. I’m immediately proud of the work we did it on it. A very collaborative effort between myself, my partner Charlene and director Dominic Hill – who is a genius.
Frances Poet adapted the text. But it is definitely still Shakespeare’s work. I’ve done a few pieces of work lately, even with Covid restrictions, but like everyone, amidst huge disruption. I directed some students via zoom, which was incredible to see their creativity under such adversity. I had another film/documentary come out this year, Doppler, [there is ] a play which was meant to happen last year – there is hope it will happen live this year, or next. I have booked a job today, which I am not allowed to announce yet, and am also involved in another project which I’d love to tell you about but contractually barred from doing so… Such is the way.. I am sooo important. 😂
Other than that, I’ve been keeping safe, with an eye on the collective good, also the appalling state of world affairs and social injustice wishing there was more we could do… Time for change. Working with exciting ambitious people is what I crave… Sharing ideas.. Being bold, brilliant and controversial. I may produce a whisky, called Whiskikki…?!! 😂 There may be a market.
I was lucky enough to do some zoom conventions with the wonderful Outlandish Vancouver group… Absolute gems… And hope I can meet more of the fans in person some day…. Outlander feels like a family at times, an extended family… Whether it be on set of with fans, you always feel welcome.”
I think Whiskiki would be a hit! (and I think Sam and Cait both might have some tips that could help Kiki get started! 😉). You can see The MacBeths film, starring Keith Fleming, online until June 30th: The MacBeths.

Will we see Keith again in Outlander?

Since Lesley is met his gruesome end, at the hands of dastardly Stephen Bonnet, you’d think not. However, there very may well be a flashback to Ardsmuir at some point (maybe even in Season 6?) Hey, Kiki, are you in Season 6??? What’s she up to now?

“I have left acting behind for the time being and focusing on developing my body image/intuitive coaching business for women. (Link to website below!)
It’s been a wild ride 🙂 Much love, Adrienne”
Adrienne’s new business: The Body Joy Academy – Bringing down diet culture, one nourished woman at a time.

Will we see Adrienne again in Outlander?

Suzette is probably still in France, doing her thing in the 1700’s. I don’t think we’ll get a chance to be with her again, sadly.

(There is more from Adrienne and the cool new work she’s up to, in the second edition). For now, spinning plates and all – this completes the first edition of OutlanderBTS: Where Are They Now.

I hope you have a lovely day!

Be sure and check out my Season 6 Filming Wraps, Overcoming Unprecedented Challenges post, if you haven’t yet. OutlanderBTS #TBT: Season 1 Boot Camp, Where it All Started… 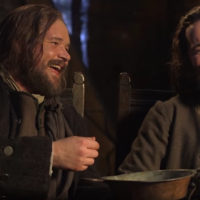 Looking Back: Stephen & Grant Play “Would You Rather” Steven McCree the Wooden Leg-end and Others by Stephen Walters… Enjoy!

13 comments on “OutlanderBTS: Where Are They Now?”