Sam is being awarded with an honorary degree today from the University of Stirling. This is the first of two honorary degrees he will receive, the *second, will be an honorary doctorate from the University of Glasgow’s Dumfries campus, near where Sam grew up (July 3rd). Both universities are recognizing Sam’s outstanding contribution to acting and also his charitable endeavors; My Peak Challenge has now raised over 4 million dollars.

In fact, the win-a-date with Sam Heughan Omaze campaign raised almost 3 million dollars alone this year! (I do remember once saying that Sam Heughan could end world hunger with a kissing booth). If you are not familiar with My Peak Challenge, check out this fun article by Cynthia Dagnal-Myron for an overview.

There is more that Sam’s been up to, but I will put that in my next What’s New, because graduation is starting soon.

The procession entering the ceremony… The live webcast is over, but Emma from Mary’s Meanders was there, bringing us Sam’s speech (almost live!), thank you Emma!

Exiting, Sam is a head taller than the rest (much like the warrior he plays, JAMMF). Sam’s mom was present for this honor. I’m sure she’s very proud of her son. Diploma, or lightsaber? ?- (After the fact, Sam said he felt like Harry Potter in his robes, so not a light saber, a wand!  See Outlander Israel’s meme below…) Here is a wee interview with Sam with some highlights from the day courtesy of the U of Stirling: Sam’s Graduation Day Video.

I am proud to be associated with Diana Gabaldon and her work, as well as the people who make the TV adaptation, Sam Heughan very chief among them!

*Thank you for that correction Anita Thomson! I originally wrote that this was the second honorary degree, and Anita let me know that the Glasgow U one hasn’t happened yet, and will on July 3rd.

For more articles like this one, go to Outlanders in Other Projects. You can find OutlanderBTS cast and crew interviews here, go here for Episode Discussions, and check out Reader Favorites during Droughtlander. Coming up: a new OutlanderBTS What’s New, and in the editor: my interview with Sera-Lys McArthur, due out soon.

Enjoy, and have a lovely Thursday xo. 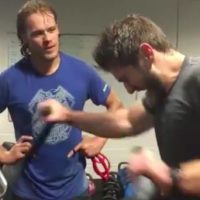