He wore New Balance, complete with matching sports watch, and a black baseball cap….?. Sam posted this picture earlier yesterday saying “Watching @TheAcademy from up here!”  My guess is  he was on a training run for the actual ceremony – shaking off some jet lag and going out for a pre-Oscar afterparty night spin. Sam flew in for one day (ugh!) for the Academy Awards celebrations.

And that night, Sam and MacKenzie attended the Vanity Fair party together. Here’s a shot of MacKenzie looking gorgeous, with Sam getting touched up for photos in back of her. Here’s a really cute shot of them together… The Anna he mentions is a writer for Glamour Magazine. Press usually visits the set sometime mid season, and it looks like that’s about to happen.

Only slightly freaking out. Speaking of, #Outlander fans: Do you have questions for the cast? (cc: @OutlanderHQ) https://t.co/vMXcv97Lwg

We heard from Kristin Dos Santos that she will also be heading to Scotland for a mid-season check in, so we can expect to see some pieces coming out in the near future.

Hey @SamHeughan @caitrionambalfe did you hear I’m coming to Scotland to see you?? Trying to play it cool but …. pic.twitter.com/faCcWztRHZ

………if you do, I will explode!
We’ve MISSED YOU!!!!!!#TheReturnOfScottishSantos https://t.co/XrLKkSFsNC

In addition to the time change, Sam is adjusting to a major weather change – this is a recent running photo from Scotland, after the UK was hit with the “Beast from the East” last Thursday. We had an inkling Sam would be at some Oscars events, as he flew from Edinburgh to LA on Saturday. Here he is with a fan at the Edi airport before leaving. In other news this weekend, pals Steven Cree, Gary Lewis, and Richard Rankin went to the movies together in Glasgow. This fan ran into them and was able to get some photos. They were all headed to see an early Gary Lewis, Douglas Henshall film: Orphans. (Richard’s beardless state is causing quite a stir among fans!)

The making of Season 4 continues to plug along… Outlander auditions were held in Ontario, Canada this past weekend. Authenticity is always a priority for Outlander (which is one of the things we love), and in that vein, production is looking for around 120 First Nations background actors. The producers will fly the actors to Scotland for up to four weeks of filming this summer. The number of applicants were so great, that auditions were closed early. Sam heads back to Glasgow today. I hope he has some sleeping scenes to do when he gets back! 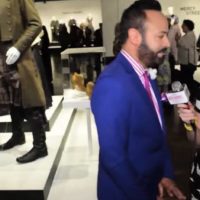