Starz just announced that Season 3 will come out in September, 2017, so we have some more waiting to do!

Here are Cait and Sam saying farewell to Scotland, and looking forward to sunny (and HOT) South Africa…

In March, production and filming on the current season moves from its home base in Scotland to Cape Town, South Africa, to shoot sea voyage scenes on the former sets of Starz’s original series Black Sails. Production on Season 3 began in September and will wrap in June. 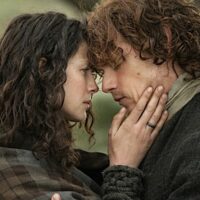