The first character for Season 4 (Drums of Autumn) has been cast!

Season 4 is in the early stages, which means the writers are writing, Terry’s team is doing research and preliminary costume design, and Gary’s team is engaged in research, location scouting and set design. The puppies will begin their training now for Season 4 with animal handler David Stewart, so when filming starts they will know all their lines!

For those concerned about the puppies not having the correct eye color ? (yellow)… Diana weighed in on this casting choice: “They look cute, but tough. They should be just right to play Rollo when the time comes,” Gabaldon tells EW. “They’d need to growl and look menacing on command, I think, and carry back prey of one kind or another to their master…”

I did a recent post about the same characters at different ages (Older J&C, Baby Bree…) and we all know dogs grow up much faster than humans. Filming for Season 4 will likely begin in Autumn sometime, and these pups may look more like this, when it does… Rollo is a beloved character, and seeing these guys makes me excited for all of the adventures (and misadventures) that lie ahead. 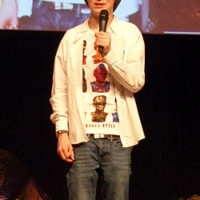 Drum Roll Please… We Have our Young Ian! 12 comments on “Season 4 Casting Has Officially Begun! Young Ian Gets His Rollo (x 2)”