Get out the champaign indeed! We have a release month! Even though we were hoping for September, what’s 2 more months in the big picture, eh? (first world problem, indeed). And, two more seasons of Outlander to look forward to!!! Waaaaaaahooooooooooo!

I personally hope that our hard working cast and crew get to have a well deserved break before plowing ahead. They are humans after all, and this screen adaptation of Outlander has been/continues to be a big chunk of their lives – indeed a marathon, not a sprint. Here’s to the restorative time that creativity demands, not to mention being a happy, balanced human. Read on for details of this wonderful announcement, and reactions from the good folks who make our beloved Outlander possible…

We couldna wait to tell you any longer. #Outlander will return to #STARZ for Season 4 this November AND for Seasons 5 and 6! https://t.co/GEqYWkh3e3 pic.twitter.com/U0ojNQrkcb

STARZ GREENLIGHTS SEASONS FIVE AND SIX of The time-travel drama

Santa Monica, Calif. – May 9, 2018 – Starz President and CEO Chris Albrecht, in association with Sony Pictures Television, announced today that the Golden Globe® nominated STARZ Original series “Outlander” will premiere its fourth season this November 2018, and also announced that Starz has renewed its hit series “Outlander” for two new seasons, taking the series through a sixth season.

“Fans can rest assured their beloved Claire and Jamie will be back facing new challenges, adversaries and adventures in seasons five and six as we delve into American history and continue the story of the Frasers as they settle in the New World,” said Albrecht.

Adapted from Diana Gabaldon’s international best-selling books and executive produced by Ronald D. Moore, Maril Davis, Toni Graphia, Matthew B. Roberts, and Andy Harries, Starz will continue to partner with Sony Pictures Television on this multi-book, 24-episode pick-up for “Outlander.” Seasons five and six will each play out over 12 episodes respectively and will be based on material from the fifth book in the Outlander series, entitled The Fiery Cross, as well as the sixth book in the series, A Breath of Snow and Ashes.

The fourth season of “Outlander” is currently shooting on location in Scotland and will include 13 episodes based upon Drums of Autumn, the fourth of eight books in Diana Gabaldon’s international best-selling Outlander series. The upcoming season continues the romantic adventures of Claire (Caitriona Balfe) and Jamie Fraser (Sam Heughan). You want more????? You got more !!!! Outlander5&6 is on its way ….!! So @SamHeughan .. you got that Zimmer frame ready?? @Outlander_STARZ @TallShipProds @LeftBankPics @SPTV ❤️❤️❤️❤️ pic.twitter.com/rX8m0VrSBt Fantastic news. Howling at the moon! 🌔🐕 bring it on @Outlander_STARZ. https://t.co/ISVi7Bs4j7

Congrats to our amazing cast, crew and producers of #Outlander and thank you to the #BestFansEver!! We are back. https://t.co/0UZMOVYe5q

Whoooooooop! So excited!!! Thank you to our cast, crew and writers for making this show so much fun to work on. We’re so excited to continue on this journey. And thanks to our amazing partners @Outlander_STARZ and @SPTV AND….thanks to the BEST FANS EVER!!!! https://t.co/ZUBwYBKeBm

A HUGE congrats to the cast and crew of @Outlander_STARZ ! I'm excited to see what seasons 5 & 6 have in store for us!!https://t.co/nq8h68CQEv pic.twitter.com/0nHYTZyXWT 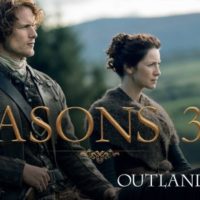