An article was released by Hollywood Reporter yesterday, in which Starz COO (that’s Chief Operating Officer, not coo ?, for you Scots), Jeffrey Hirsch, is quoted talking about Starz’ new focus on what it’s calling the “Premium Female.” I have been watching the fan reaction, and feeling my own, and felt compelled to write this (opinion!) piece…

“When we dug deeper, we learned it was premium women who were driving the service. We’ve started to lean into that. Everything we do now has to service that kind of programming mandate.”

“…A little older — probably 24-54 and a little more economically viable than other segments, in terms of broadcast. They really like high scripted drama, great women in history and a lot of IP [intellectual property]. You look at the audience for Outlander and that’s the perfect audience for us.”

I’m a little confused here, on several levels, and, I want to approach this in a compassionate way. After all, Chris Albrecht, the man who was instrumental in bringing us Outlander in the first place, just stepped down as CEO of Starz in March of this year, leaving an empty seat for that role, and Jeffrey Hirsch at the helm, as COO. That’s only 4 months, so this really is this guy’s debut in this role. Hirsch, 43, was originally hired as president of marketing and product development, in 2015, and before that worked for Time Warner, eventually managing sales, marketing, customer care, and operations. Maybe he doesn’t realize that Premium Females read these press releases? ?

OK, First point: I have 3+ years of demographic data from the almost 3.5 million views on my site that tells me the largest demographic of my site, (which may or may not be a microcosm of the whole fan base), is age 55-64. Age 24 is in the group with the lowest viewership, as a matter of fact, with 65+ using my site almost 5 times more than anyone in the 24-year-old age group. Hmmmm. Makes me wonder what their demographic age range actually is. Do they even collect data on people above the geriatric age of 54? ?

Second point: My understanding is that Chris Albrecht’s original vision was to serve existing fan bases with Starz Originals. This is a quote from Ron D. Moore from a 2014 interview with Variety:

“…And Chris said to me, ‘make this show for the fans and trust that anyone who’s not a fan will be swept up in the story the same way all the readers were.’ And I was like, “yes, sir!” It was just great. That’s exactly what you hope that they’re going to do.”

Chris Albrecht knew that Diana had sold around 15+ million books at the time of this deal, and I have to believe he would’ve done his homework on the demographics.  In this interview, Mr. Hirsch makes it sound like this is a recent and amazing discovery, and that now, they need to “lean into” this knowledge by making awesome female centric shows (read: more Super Claire ?and Not Quite Jamie ?). Maybe not, but, that’s where my mind went first.

Q: Still, it’s such a shift [the focus on Premium Female] because so much of what that network [Starz] was built on was male-focused content like Spartacus and Black Sails.

Hirsch: “Spartacus actually skewed female. Black Sails was a little more balanced and skewed more male. But Spartacus was female characters manipulating the men around the board. Power is 65 percent female. If you look at the show, on the surface, it’s a good-looking African American drug dealer trying to get out of the trade and it’s a gangster male show. But the real core of that is it’s a soap opera with a love triangle.”

Did I just read soap opera with a love triangle, and “female characters manipulating the men around the board” is what Hirsch perceives the Female Premium is craving???

Q: As you reassess your programming slate, turning your back on a critically beloved show like Counterpart — which has a 100 percent score for both seasons on RottenTomatoes.com — seems questionable. Was that decision based purely on the fact that it was a male-focused show?

“Justin Marks is a great writer. I’d love to find something else we can do together…. It was very complicated and there’s nothing wrong with being complicated. But to a certain extent, part of my view on the world today is for the most part people’s lives are tough and when they come home at night and want to escape their lives, they want to be able to get into a piece of content very easily and escape.”

Repeat of above gif…

“What we have seen with our Spanish Princess/White Queen series is great women in history play really well for that audience [Premium Female]. We’ll lean into that as a quasi-genre. Outlander you can say that it’s great because women like it because she’s a surgeon who goes back in time but there’s also another side of that, which is there’s some eye candy for that audience and people like when he has his shirt off. You have to be really thoughtful about when you’re looking at a piece of content and whether it’s really going to be female or not. And it’s not easy.”

<hang on, I am speechless>

OK. I can’t really even address that last comment. I am still speechless.

“The other show on Netflix that’s really performing well is Outlander. The nice thing about being in a creative industry is it’s not just you can go buy all the creativity and keep it from other people. There’s always a fresh voice. Part of the reason why we’re leaning into this underserved audience and female focus is because others aren’t. At the end of the day, we want to be a complement to those other services with a very unique programming strategy. And we’ve been really successful to date and I think we will continue to be.”

Maybe it’s just me, but does it almost feel like Jeffrey sees himself as a philanthropist??? Serving the underserved older ladies (with the big pocketbooks). ?

Mr. Hirsch Regarding Outlander on Netflix:

“The Outlander deal was a Sony deal that was done before I got to Starz; I would not have allowed that to happen. It’s the ying and the yang from a business perspective of taking the short-term money and building great, long-term enterprise value. And if I put my straight business hat on, from a shareholder perspective, building great enterprise value is the most important thing. We made a decision as Lionsgate… that we are going to all service to Starz, domestically and internationally, and will make a big run at it.” throw the very accomplished Chris Albrecht, who actually built HBO and Starz into what they are today, under the proverbial bus? ?

Mr. H did include a comment about the release date of Outlander, saying it was always intended to be next year…

Q: Outlander is not returning until 2020. Is that to allow Starz to reset and use it to kick off a new push for “premium women”?

Hirsch: “It was always going to be next year, actually, just based on production schedules and such. We really like where we fit it in, in terms of that audience tradeoff [with Power]. It will [return] earlier in the year.”

In conclusion: This article does not leave me feeling optimistic about getting the deeply layered, more balanced Jamie and Claire that many of us Premium Women, and some of you Really Old (55+) ?Women crave. Maybe we can get a kind message to Mr H., letting him know that Outlander, for us, is so much more than a female surgeon going back in time, to be with a great piece of eye candy.

My advice: Go back to Season 1, Mr. Hirsch, to see what we Premium Babes with all the spending money like. It’s all there….

What say you? Leave your thoughts in the comments below. ***PS This is not an invitation to bash Mr. Hirsch, who is undoubtedly someone’s son, husband, father, brother, etc., and is doing his best. If you need to, take a moment, and then comment. Sending you my best, always. xo

For the full article: Hollywood Reporter

for more on OutlanderBTS Passion Pieces. 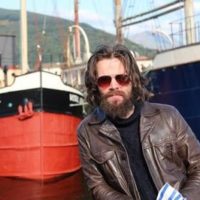 Sophie Skelton – Check this out