I am re-releasing my interview with Tim Downie, done last May, just after filming for Season 5 got underway. He played such a big part in the latest episode, here is more insight into his character, Governor William Tryon…

What a pleasure it was to spend a chunk of time recently with Tim Downie, whom I have known on Twitter now, for years. A friend of Mr. Heughan, Tim joined into the Twitter banter with Outlander fans back in 2013, winning our hearts, and then eventually winning a role on Outlander, in Season 4, as the not-so-popular Governor William Tryon. We talk about his casting story, the development of his character, stories from set, his own history, Tryon’s relationship with Jamie, and Claire, possible deleted scenes, his many pursuits outside of Outlander, his friendship with Sam, and more.

Two points of clarification: in the UK,

Tim has made many many cakes since this chat, here are but a few: Our OutlanderBTS episode discussion of Ep 507, The Ballad of Roger Mac is up now, so check it out! #BTS507

Check out my other interviews here: My Interviews, also catch up on all our Season 5 discussions here: OutlanderBTS Episode Discussions. 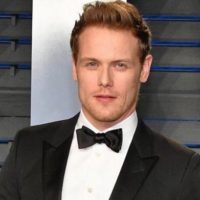 Jamie Is a Hero