Diana, Sam, and Cait say a brief hello from South Africa in the below video (thank you Olga ?).

The cast and crew were featured on Instagram, here are a few photos… Sam goofs around on his bike during a break… Sam looks for his cup of coffee… A view of the ship and crew preparing… Diana posted these pics on her FB page, and had this to say:

“Spent the day on set at the Outlander studio, and had a great time. Was actually working today, doing PR videos and promo announcements for various countries (“Hello to all our Outlander fans in Scandinavia! Hope you enjoy Season Three of Outlander on Viaplay!” etc., etc….), plus a to-camera interview (they call it that because the cut out the interviewer’s questions, so it looks like I’m just talking straight to the camera) that Sony and Starz can cut up and use in little bits wherever they like.

Got Professionally Made Up–and I tell you, when a professional TV makeup artist makes you up, you stay that way, though the hair is a little less static. The lovely makeup person did do my hair beautifully, and with luck, that will have lasted through all the filming. I was standing in the hot South African sun through it all, though, and by the end, my hair had pretty much given up, so I just borrowed a hair elastic from Sam’s charming makeup person, Wendy, and tied it back.

Got to watch quite a lot of filming–deeply entertaining, as always. Pretty sure you’re going to really enjoy this season!” Below are Diana’s notes from her first day (Friday) on set in Capetown:

‘Friday was our first full day in Cape Town, and the major activity was going to the Outlander Studio, to meet Maril and everybody, and tour the amazing new sets!

Wonderful to see Maril, Sam and Caitriona again, as well as Nick Heckstall-Smith (AD) and a few other of the Scottish crew that have come down. Also Luke Schelhaas, one of the new writers, who’s covering this block (meaning he’s the writer on set every day, responsible for the billions of on-the-spot changes and adjustments to the script that are needed; all scripts flex a _lot_ during the actual filming, no matter how many revisions they’ve been through beforehand).

We were just in time to catch David Brown, the Executive Producer for the whole show (meaning he’s the person without whom none of this could happen–he knows where to find anything and anybody, and how it all works) before he caught his flight back to Scotland (where the flock is gathering to begin prep for Season 4–this stuff takes a _LOT_ of work and thought and planning). David drove us off at high speed in his golf-cart, and we zipped out to tour the ships (I figure I’m not giving away any state secrets by telling you there are ships in this part of the show…), which are fabulous, and I don’t only mean cosmetically (my baseline for 18th century sailing ships is Disneyland’s “Columbia” and these are even better); they’re equipped with all kinds of hydraulics, gimbals, and water cannons (!!!) that make the ships nearly as expressive as the actors.

We also roared through several newly-built (and in-progress) outdoor sets, some adapted from the existing Black Sails sets (but you’ll never recognize them) and some newly built. Most striking aspects were the landscape plantings and the sand (I won’t tell you why; you’ll just have to wait and see…). Ditto several enormous tanks of water (well, we didn’t roar _through_ those; just up to the edge to have a look).

Then David had to rush to catch a plane, so Maril took over and we had a look at the indoor sets inside the (HUGE!!) studio buildings. The last one we came to was in use, and we waited a moment for the take to finish. Then Maril led us up a short flight of stairs to the door. It opened before she could reach for the door-handle, and out popped Sam and then Caitriona, both in costume and perspiring as though it was in fact July in Jamaica (film lights are Way Hot, especially in a small, confined space). Lovely to see them both again.

Short break, then back to filming. We were kindly accommodated with seats in the DOP (Director of Photography)’s tent, with headphones, so we could watch the filming. Usual mixture of fascination and boredom, with incidental entertainment (as someone said to me afterward, “How can they be giggling and poking each other, then in half a second, they’re somebody else completely and doing their lines?” To which the only reply is, “They’re actors.”)

Shared the late lunch/tea-break (they were shooting until 11 PM, so “lunch” was at 6:00 PM) with the crew, watched a bit more filming, and then bade the hard-working cast and crew a cheery farewell, and rolled back to our hotel to eat medium-rare springbok and mango sorbet. And the morning and the evening were the First Day…” 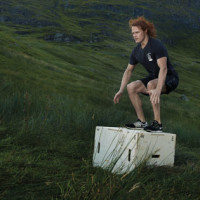