I loved Episode 405, for many reasons – one specific one being the return of this guy! Duncan Lacroix chats about coming back to Outlander…

What did you think about bringing back Murtagh in season four, even though he’s long dead in the books?

Well obviously it’s a gamble by the writers and the show runners. They obviously felt that the character was important enough to that family unit to survive. I’m a bit worried to see some of the reactions—it’s going to be interesting. But by the same token it’s not my job to worry about the differences between the book and the show. My job is to act what’s in the script.

You filmed this season in Scotland, but it takes place in North Carolina. Was it hard to keep in mind that you were supposed to be in America?

You’re basically working in exactly the same fields and the same locations, and it’s Scotland, but you just put that out of your mind. You’re already imagining that you’re back in the 18th century anyways—that’s the bigger leap. And the set we have, Fraser’s Ridge, is fantastic. What Jon Gary Steel built was incredible—it’s not a hard leap for the imagination.

I’m always amazed every season by what Gary makes, he’s just a genius. In season two he built an entire three story Paris apartment in a studio. Upholstery, little cubby holes, things you wouldn’t see on camera. And for this season he built this smithy, which was very elaborate, and then you walked out into a whole town, Willem’s Creek. In between takes I would walk up and down the streets pretending I was a cowboy. I was a five years old again, getting into gun fights with the sound engineer.

Jamie is very cautious of the regulators but it’s not hard to imagine that someone like Murtagh would join a group resisting British rule.

Not at all. Murtagh’s over there in America and everything that was important to him that was taken away. He’s been an indentured servant for 12 years, had no freedom. Jamie was taken away from him, Scotland was taken from him. It wouldn’t take much tinder to get that fire started.

What was it like being reunited with Sam Heughan onscreen?

The whole season we worked a bit more sporadically with each other. This season has more story strands and points of view and separate pieces. I got to work with new people, like John Bell and Sophie Skelton, which was great. But it’s great working with Sam, that shared chemistry we’ve built up over five years now, that’s just there. Our characters have a bit of a rough go. There’s a whole lot of tension that builds up between them over the course of the season. But of course Jamie and Murtagh are the other great love story of the show.

I’m sure I’m not alone: I’m absolutely looking forward to more Murtagh in Season 4 (and beyond??)! 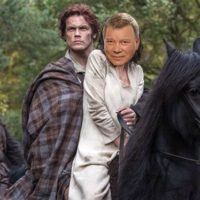 37 comments on “Duncan Lacroix on the Return of Murtagh” My Hopes and Predictions for Season 6 Storylines