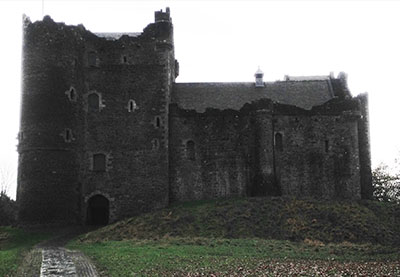 My impetus for this site? Chris Albrecht of Starz had a vision: to create shows that capitalize on existing fan bases – Outlander being one. The Outlander fan base is intelligent, sophisticated, and knows its subject matter. In my opinion, the media and industry coverage started off very out of synch with Mr. Albrecht’s vision, and there has been a chasm between what fans want and what the media offers in terms of coverage, content and depth. My goal with this site has been to bridge that gap and help elevate the coverage of this project and everything that surrounds it to a deeper, more satisfying level for all involved: the fans, the artists, and the media providers. So far, it resonates with like minded fans, which helps to drive the mission of this site: to offer quality curated content that respects the integrity, intelligence and dignity of the artists and of the people who provide and consume it– in short, all parties. I’m Courtney Williams, originator and producer of this site. I’ve been an Outlander fan since 2006, when my mom introduced me to the book series. When I first saw the TV Guide cover heralding Outlander’s visual adaptation, I thought no way, this is gonna stink. I later stumbled on Starz’ free offering of Episode 1 on a rare occasion when I was home alone in August of 2014. I hunkered down and watched, prepared to be disappointed. As I watched though, to my surprise, I began to relax, and then I began to get excited. Really really excited… as I took in the acting, the landscape, the costumes, the casting, the sets, the music, the Gaelic, the cinematography, Scotland, EVERYTHING. It was so beautiful in every way, I couldn’t believe my senses. In short order, I was hooked (I know, you too- a familiar tale).

After that, I started looking for information about the show. I caught wind of a Twitter Q & A with Caitriona and Sam, and said to my husband, “Help! I need a Twitter account!” That was Sept 2014, and since then, I’ve been to Scotland six times(!). I started this blog in April of 2016, and it’s been growing ever since. I started by culling through what was out there and posting curated content from other providers. Then, I began providing my own content. And now, the site has grown into quite a robust offering, with a healthy following (23,000 subscribers/followers across all platforms, 5.6 million+ views, and used by people in 185 of the world’s 195 countries).

In addition to writing my own articles and providing curated outside content, I research, conduct, and fully edit and produce my own video interviews with the cast and crew. I also do live interviews, written interviews, I moderate panels for others, and I am a guest speaker. You can find all this under the Courtney’s Videos section. More interviews coming up.

In 2017, I created the Patron Program to help fund this site: readers contribute to help the site stay advertising free, and get special rewards. And new in 2022, an Outlander Behind The Scenes Scotland 2023 Tour for Patrons!

In 2018, I started an Episode Discussion group that has been affectionately named (by readers) “The BTS Lasses” and “The Fab 4” including Karmen Schmidt (Outlander Anatomy), Catherine Toomer, (family physician and contributor to Blacklanderz), and Antoinette Simmons (prosecuting attorney and general badass). You can find all our chats in Episode Discussions, and BTS Lasses Live Panels.

In 2019, I redesigned the site, creating the Readers Favorites section and Featured Favorites, so readers can find past articles easily. This is a good place to browse around during the inevitable Droughtlanders.

In 2020, I was invited to host Sam’s live panel at Wizard World NOLA, which was a blast, and just before the world shut down. Outlander Season 5 was released in February, and the BTS Lasses were there to discuss it. In April of 2020, I was invited to moderate the first Outlander virtual panel for Wizard World. I interviewed Graham McTavish that month about Clanlands and coming back in Season 5 as Buck. I rounded out the year with a big giveaway for OutlanderBTS Patrons, including Sassenach whisky and some other cool stuff – because we needed it!!

Highlights from 2021 include co-writing an article with Diana Gabaldon, Herself, an interview with the uber talented Jack Holden, being a guest speaker for two live video discussions with The Dipp (only one of which was captured), starting my new Where Are They Now series, a Patron giveaway, supporting Patron Partner Ozlander Fan Gathering, and including a chat with Tim Downie, and a weekend + live panel with two of my three BTS Lasses at Wizard World Chicago. Sam and Duncan were there too – it was great to get out!

2022 is off to a fab start, as I spent January putting together the first ever Outlander Behind The Scenes Scotland 2023 Tour with new Patron Partner Prime Tours. Season 6 kicked off in March, was fabulous, and BTS Lasses were there to discuss! Gold Derby interviewed me as part of their Season 6 weekly recaps, and I did a piece on the actor who’s been cast as William Ransom for Season 7!

Since falling in love with this project, I’ve attended countless Outlander events, many of which I’ve written short stories about, which you can find under Courtney’s Articles in BTS Adventures, along with articles on What’s New, Casting News, Awards, Passion Pieces, Episode Reviews, Twitter Q&A Recaps, and more. You’ll find Outlander Clips, Outside Interviews, articles on Costumes, Music, Sets, on Sam, Cait, Diana and the whole cast. I’ve made Outlander connections and friends all over the world, in person and via social media, including Diana G, and my 3 wonderful BTS sisters, as well as cast, crew and fans. Exposure to this creation and its people reignited my passion for traveling, writing, journalism, photography, and multimedia story telling. In this way, Outlander has actually become a big part of my life.

Please enjoy OutlanderBTS.com. If you have a request for certain information or a particular interview, please let me know either via email (courtney@outlanderbts.com) or in the comments section, or via contact, and I’ll do my best to provide it for you. Thanks for visiting.

I chose the Celtic knot as the symbol in my logo. Celtic knots started appearing in history after about 450 AD. They are endless paths that represent eternity… this can be in love, faith, loyalty, or friendship. Celtic knots with more than a single path interwoven can be seen as metaphors for life and the interweaving of lives. They are frequently referred to as “love knots.” This symbol resonates for me personally and in relation to Outlander.