Featured Favorites is a new section of the blog highlighting past posts, that are worth a revisit. This is a good place to come and hang out for a while, especially during Droughtlander. This page will be updated periodically, so check back! Enjoy…

As I publish posts about the filming of Season 6, they will go here. Yipeee!

Cover Photo: John Bell as Young Ian, by César Domboy This post contains SPOILERS! Season 6 filming is underway; we know when Davie Hollywood is getting up at 4:00AM on weekdays, it’s time to drive one Sam Heughan to work for the filming of Outlander.  Source: Davie Hollywood, Insta Davie has been Sam’s driver since […]

Photo: S5 ending, where we left off. Merry Christmas, Happy Hanukkah, Feliz Caga Tió, Furaha ya Kwanzaa, Happy Boxing Day, First footing, Ōmisoka, or whatever you happen to celebrate! We got an exciting update from Starz yesterday – from Sam, Cait, Sophie, and Richard about filming starting for Season 6, and some little tidbits. Sam […] We’ve been hearing about Season 6 filming starting in January, which seems to be, by all appearances, on track to happen. Sam has mentioned in several interviews that there’ve been scripts received and costume fittings. It will certainly be a whole new world – filming with covid-19 restrictions.  What will be included in Season 6? […]

Top 3 Most Popular Posts of All Time

These are my most popular posts of all time. This first one, in a category all its own, is a spoof interview between Josh Horowitz and “Jamie and Claire” which is hilarious. Enjoy! There have been A LOT of interviews released this past week, I mean A LOT (including mine – in case you missed it: OutlanderBTS S3 NYC ), and my overriding take away about our two wonderful leads is this: they are gracious, fun, fun loving, and game for pretty much anything. HATS off to Josh Horowitz […]

The 2nd most popular post of all time, is also in a category of its own: Sam and Cait’s original chemistry test, the scene from Ep 109, The Reckoning…

This really never gets old… Happy Weekend! A look back at the very beginning, when Sam and Cait first met. This was their “chemistry” test. Sam was already cast as Jamie, and reading with lots of potential Claires at the time, when Caitriona came in, and POW! The rest is history. Enjoy… For a wee […]

Big news this morning from Sam and Graham – their book, Clanlands will be published on November 3rd, 2020, and is now available for preorder in the US. And, Diana, Herself, is writing the forward! She says: ‘I’m so pleased to announce that Sam and Graham have invited me to write the foreword for their Clanlands book! […]

In the spotlight for now, are fun, funny posts from the past. Check these out when you need an Outlander inspired laugh… Win a date with charming Sam, here’s how… Click the link below the video to enter. Win a DATE WITH SAM. Photo: Sony/Starz… Does Murtagh lose his mind in Season 5??? Nawww, that’s Duncan pulling a face, in the Season 4 gag reel!  Here is the Season 4 gag reel, (thanks to Heughlander 2.0) which is verra entertaining, imo. It’s wonderful to see how much fun these guys have on location, and DANG it looks cold […] Cover Meme by @drinklander On October 15th, Saeed Jones was home sick from work and decided to watch and live tweet the first season of Outlander. Who is Saeed Jones, you ask? According to Wikipedia, he’s an American poet whose debut collection Prelude to a Bruise was named a 2014 finalist for the National Book Critics Circle Award […] Gag reels seem to come out about a month before the current season’s DVD and Blu-rays are released. That means that Season 4 gag reels could be out at the end of April, since the DVD’s are due May 28th. Keeping my fingers crossed! In the meantime, enjoy this look back at the Season 3 […] Photo: BTS Season 2, Stephen, Grant, and Andrew, from Twitter Àdhamh does some brilliant impressions of the cast, some characters, the showrunner, and more in this segment of our interview.    Click here for PART 1 of this interview.  For Part 6, CLICK HERE To purchase the cd and request a signed copy of Air Forladh […] Photo: Parade Magazine, Sept 2017 *The Season 3 DVD, Blu-ray, and Gag Reels will apparently be out in the US April 10th. Rumor has it that among the extras will be Sam and Cait’s original chemistry test from their first meeting back in August of 2013. If it’s true, that will be pretty fun to […] What a treat! Enjoy this comedic deleted scene from Episode 209… The gang’s all here, discussing their unique approaches to getting rid of lice. I can certainly see why Grant nicknamed Claire “Kill Joy” (or something similar) based on this scene. Phew! In her defense, this precedes the PTSD sequence, so she’s not exactly supposed […] Photo by @GleniceSells (PS Bill, that’s Grant right behind you and Jamie there) Courtney’s Comments: Now I promised you guys Quality Curated Content, but sometimes I have to take an immaturity break, so if you find this offensive, please skip along to the next post 🙂 and thank you for visiting. And yes, I do like Bill […] 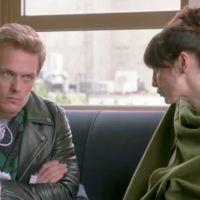