“I’m a bit obsessed with Everest. There’s something about the mystique and being in that situation so close to death. I just find it really interesting. It’s like the last place we can go where we’re still explorers — apart from the sea.

“When I go climbing here in Scotland, the mountains are beautiful and stunning in the summer, and I even go up in shorts and T-shirt. It’s pretty cold, but in the winter, I’ve been close to real danger, like so easily. In fact, I went up Ben Lomond in I believe it was April last year. There was still snow up there, and I was climbing with a friend of mine. We didn’t have any snow gear, and it was fine, but suddenly we’re in a blizzard — couldn’t see like 10 yards. We sort of knew the way and we started climbing around, up in the snow. Then, at the same time, we both slipped. We slid down the mountain for about 100 feet and it was snow just falling off the mountain. Luckily we just went straight down and just sort of missed [the precipice], but we were like, What are we doing??

“The funny thing is, I’m very safe in the mountains. The friends I go with are less so. I’m always the one who’s like, “No let’s turn back.” I’ve turned back quite a few times. But there’s this thing when you get so close to [death] — that’s the reason that Everest, they go up there and they want it so much and they get so far and they apparently push too far and that’s when they get into trouble.” Kudos to Ron D. Moore, Anna Foerster, and All in Editing and Post Production 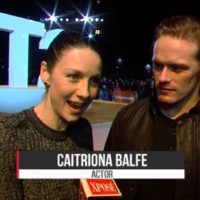