I appreciate good writing. I think we all do, that’s why we’re here. I really enjoyed reading this article by Leah Flickinger about Sam. There’s some new information here, and she took her time, so we feel that. Here are some excerpts, and then I’ll send you on over to the full article.

Also photographer Steven Lippman took some beautiful photos, including this one… and the cover photo. He had a wild imagination and was awestruck when Highlander reenactment groups would come through town in summer. “I was like, ‘This is what they do every day! They just fight and pretend to be soldiers.’ It was kind of cool,” he says. There’s an anecdote that appears in nearly every story about Heughan’s childhood that has begun to feel almost mythic: He’d scramble amongst the crumbling ruins pretending to be one of King Arthur’s knights or Robert the Bruce, the 14th-century King of Scots and national hero, brandishing a sword he’d hammered together out of scrap wood.

Heughan was still years away from hunk status and his own outsize Highlander alter ego. Back then he wore chunky glasses with thick lenses (“I had very bad eyesight — still do”) and considered himself “slightly overweight.” It was also around this time that he thought it would be cool to be a magician when he grew up. “I used to go to these magic shops and buy decks of cards and try and learn tricks.” But whenever there was a gathering, Chrissie would stand him up and make him perform — which was not his favorite. “I hated the attention,” he says.
The family moved to Edinburgh when Heughan was 12, and he attended a Rudolf Steiner school (the kind of place where things like individuality and social consciousness are nurtured equally alongside academics) and got involved in the Royal Lyceum’s Youth Theatre program, first behind the scenes and then on stage. After high school he indulged a couple years of wanderlust before auditioning for the Royal Scottish Academy of Music and Drama, now known as the Royal Conservatoire of Scotland. He got in on his second try and was still a student when he was cast in a West End production of the play “Outlying Islands” by David Greig, for which he received a 2003 Laurence Olivier Award nomination for Most Promising Performer. It was another 10 years before he would be cast in “Outlander,” after a steady string of small movie and TV roles, a stint as Batman in a touring stage production and several pilot seasons in Los Angeles.
In 2013, Heughan returned to the United Kingdom with little to show after yet another pilot season and wondered how much longer he could live out of a duffel bag, not knowing where his next check would come from. Just weeks before he was cast in “Outlander” he found himself adrift in existential reckoning: “What do I even want? Do I want a family? Do I need to work in a bar again? Can I do this for the rest of my life?”
For the full article: The Incredible Good Fortune of Sam Heughan. by Leah Flickinger for Redbull.com
Those of you who are Peakers will know that the “friend-slash-business-partner” mentioned in this article is one Alexander Norouzi, and that we saw a wee video from Sam’s Instagram account sharing a bit of that post photo shoot ride…

Definitely looks like 2 guys ready for a fun weekend!
***If you would like to pick up a physical copy of this article, with its gorgeous photos, the author tells me that they will be distributed in Hudson News Stores (mostly found in airports), and her guesstimate is 9/18 for publication. Here is a map of a Hudson store near you!  Hudson Store Near Me To Get Awesome Sam Article. **** (Thanks for the question Rosanne!). My buddy Lori mentioned that she found an issue of this The Red Bulletin magazine with Sam’s article at Barnes & Noble, so keep an eye out! 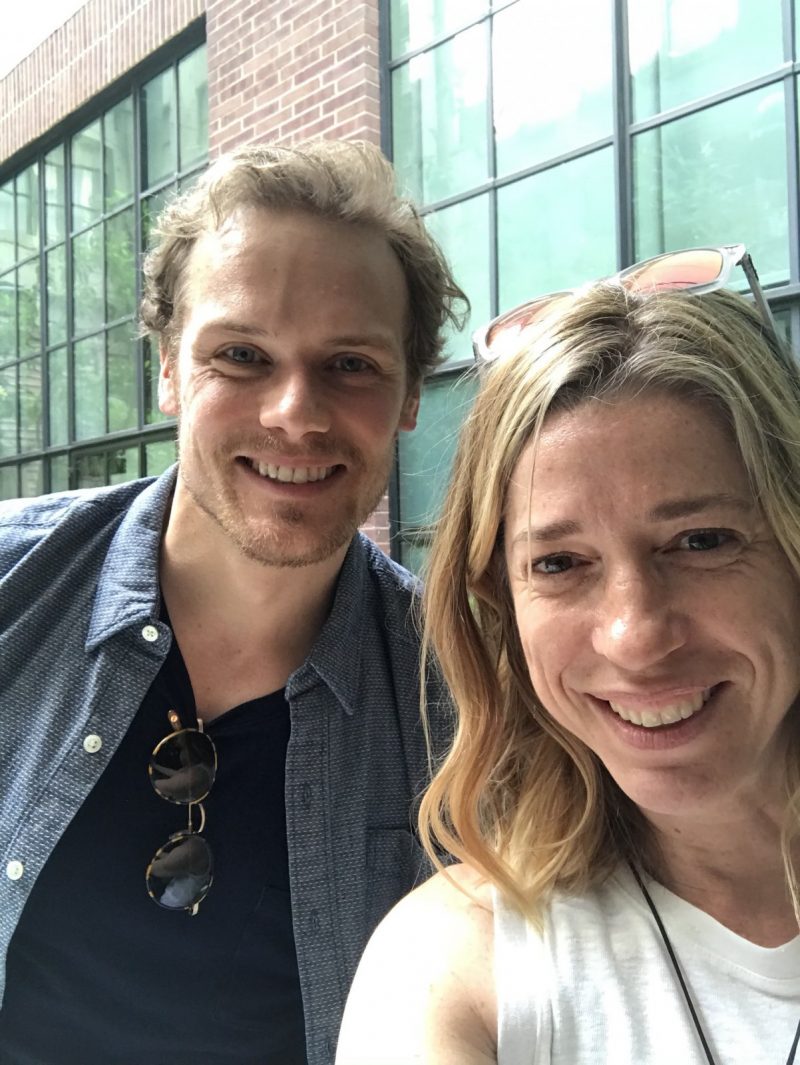 Leah and Sam on the day of their interview, July 2018. Dear Cait and Sam… Relationship Advice From Our Protagonists 9 comments on “Over And Under The Moon: Nicely Done Article On Mr. Heughan”