Sam was on hand for a quick Q&A today, here are the highlights:

Ep 2 for me! Though didn't love the beard…. wonderful scenes with Jenny and Fergus https://t.co/PkIaTvsBY9

Who spent more time in hair and makeup?

Me!!! #dunbonnet!!! This Cait was jealous of the beard https://t.co/FTaCGVitrY

On playing older Jamie and Claire…

#AskTheFrasers how it feels to be playing “old” jamie and claire now, like new different characters or as “riding a bycicle”? Love u guys 💜

Still same characters but with more weight and detail. So fun to live through their experiences and see them@chhange and their relationship https://t.co/XKOnBn6yqA

How many times did Sam hit the deck in the Print Shop…?

@SamHeughan @caitrionambalfe @Outlander_STARZ how many times did you have to faint? #AskTheFrasers

On his favorite new character in S3… himself ?

On challenges of The Print Shop episode…

What's the hardest part to record the reunion episode? #AskTheFrasers

A lot of expectation on this scene, but so many important moments prior and after, important to give everything equal attention https://t.co/Xku2M57abj

Hardest scene to film in S3

What was the most tricky scene to film in season 3, that we’ve seen so far? @SamHeughan @caitrionambalfe #AskTheFrasers

Ta! is British for “Thank you”

On being A. Malcolm, Printer…

I've worked for 2 years in a Printshop. Did you have to learn something for the episode 6? @SamHeughan @caitrionambalfe #AskTheFrasers

I did! I learnt to do all the printing process for the titles https://t.co/QMgYacQz5o

@SamHeughan How cool was it really to print those pages? had a little bit envy because I wish I cold try to do typography 🇧🇷

I love it! I actually have the first two pieces I ever printed… might give one away! https://t.co/tOloflqIhl

I’m sure one William Shatner would love to get ahold of those for his annual charity auction!

Mindhunter is Sam’s current favorite TV show, and Rollo gets a lot of treats and has bigger biceps than Sam (huh? ?) And with that, his battery died….

But then he came back…

On what goes into playing Jamie…

Is it easier as an actor having as much detail as Diana gives in her books when you're playing the role? Or would you rather use your own?

It's a combination. I use Diana's books as a guide. But also have to bring myself. Another actor would play him differently. https://t.co/i24w9OTmp0

#AskTheFrasers @SamHeughan do you still feel the impulse or need to consult with Diana after all this time about Jamie's state of mind?

what do you think you have in common with @Writer_DG ? #AskTheFrasers

On scenes that didn’t make the final cut…

@SamHeughan which of the these faces of Jamie do you wish you could have have more scenes?#MacDubh #AMalcolm #DUNBONNET #AskTheFrasers

There were a few Dunbonnet scenes cut, would love to see on DVD https://t.co/RZTccny2Ht

On Ed Speleers, the new Stephen Bonnet in Season 4… looks like our villain lovers have a new heart throb in town

have you heard @RealEdSpeleers accent for Stephen Bonnet? @SamHeughan @caitrionambalfe #AskTheFrasers because irish accents are difficult

He's wonderful!! You'll love him. Maybe too much… https://t.co/rfjyR1XzMz

On how much sleep Sam gets… Momlanders are concerned for our favorite leading man!

And that’s a wrap… Hope you enjoyed xo

Thank you all #AsktheFrasers
Sorry i had technology issues!
Here's a pic with my favourite macaron. And some wee guy@romannberrux pic.twitter.com/HsjN79j3Kr Sweet New Interview with Sam + Release Dates around the ?: The Spy Who Dumped Me Cait and Sam on Season 3: Claire as a Mom, Being in Love with Ghosts, Laura Prudom, Variety How Does A Kilt Work? Demonstrated by Jamie, in This Deleted Scene 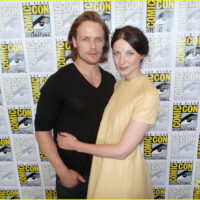